Water is the source of life. The first micro-organisms appeared in the ocean more than 4 billion years ago, and since then they have evolved, multiplied and colonized our planet. Nowadays all ecosystems and living species need water to survive. Humans, today more than ever, need water  for drinking, eating, cultivating our crops, building our homes, producing our clothes, cars, smartphones, computers; nothing would be possible without freshwater.

Our planet is called the « Blue planet » as 71% of Earth’s surface is made of water, giving the impression that we do not lack this resource. But 97,5% of it is saltwater contained by seas and oceans. Only 2,5% is freshwater of which only 30% is groundwater. The majority is held in glaciers, permafrost and the atmosphere, rendering it unusable. Additionally, less than 1% of earth’s water is both fresh and liquid.

By 2050 we expect our water needs to increase by 55% due to population growth and mass consumption. The risk of shortage increases as freshwater reserves are limited and overexploited, with more than 80% of freshwater reserves already being collected yearly. Overconsumption of freshwater causes numerous issues: social inequalities, loss of biodiversity, degradation of ecosystems, contamination of waters…

Water is at the heart 21st century challenges, being closely linked to global warming, food security, energy, health and equality. Presented during World Water Week last August, two new reports from FAO, the UN Food and Agriculture Organization, warned about the urgent need to use water more sparingly and responsibly. This article aims to present the causes of the pressure on the resource, the risks and the alternatives to this overconsumption model that must be put in place.

What are the pressures on water resources and the risks associated?

Our industries are water-intensive. Globally, approximately 19% of fresh water is consumed for industrial purposes, often with high inefficiencies, leading to overextraction and in turn to degradation of ecosystems. In addition, our agricultural system is particularly damaging to water sources, representing 70% of global freshwater withdrawals. Pesticides released in the fields and chemical ingredients required in factories pollute water sources and accelerate the destruction of ecosystems.

One in five underground aquifers, source of drinking water for half of the world's population, is being overexploited. Excessive withdrawals accentuate the risk of landslides and promote salt ingress, eventually rendering water undrinkable. With rising sea levels, the quality of freshwater in aquifers is threatened in large cities such as Shanghai, China, and Dhaka, Bangladesh.

From a social point of view, water has become a factor of inequality as it is being privatized, polluted and thus rendered inaccessible. Unequal distribution happens both within and between countries: 9 countries concentrate 60% of global freshwater. Access to water is a major issue. The FAO report highlights that one in three people live in countries under water stress, meaning countries that do not have « efficient, clean and affordable water for livelihoods, public health and industry » according to the World Resources Institute's definition. The lack of freshwater is the largest cause of illness, brings state-level economic repercussions and is at the heart of many economic and social inequalities. Freshwater is vital to reduce poverty and produce food and energy.

If current levels of consumption and pollution are maintained, at best 50% of the world will be living in water-stressed areas by 2050, at worst, 55% by 2030 according to Options for Decoupling Economic Growth from Water Use and Water Pollution, 2016, UN Environment Program & International Resource Panel. 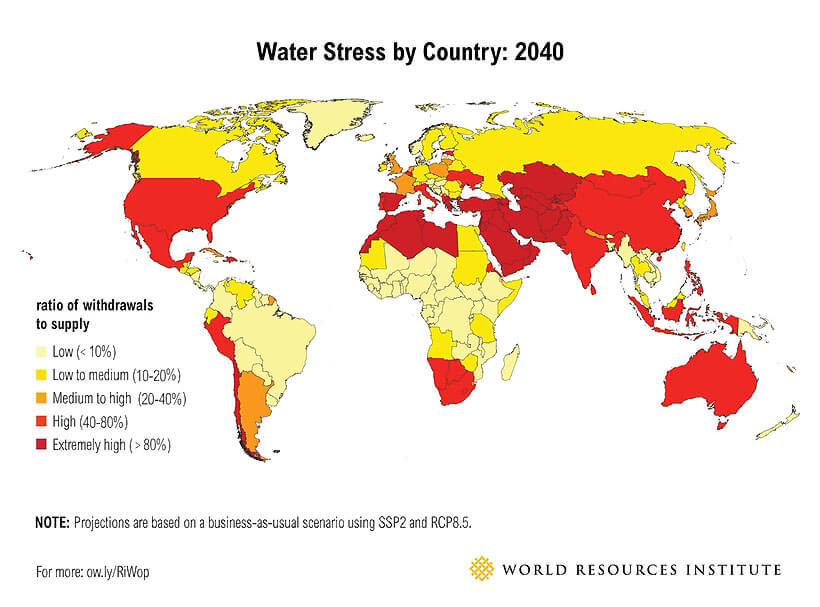 What are the current and potential initiatives to regenerate water resources?

Freshwater is essential to life on earth and to our civilization, both now endangered. To reverse this escalating existential threat we must preserve and distribute freshwater equitably, meaning governments, communities and companies must urgently change their optics and usage of water.

Governments must put in place efficient facilities and infrastructures, to distribute freshwater, recover wastewater and reuse greywater. The reuse of wastewater varies greatly between countries. In 2020 Greece, Italy and Spain wree reusing between 5% and 12% of wastewater . Other countries, such as Singapore or Namibia, reuse 100% of wastewater (source: EU Water Reuse Blueprint). In the context of the Circular Economy Action Plan adopted in 2020, the European Commission announced it will facilitate water reuse and efficiency in many sectors, through initiatives like the new European ruling on agricultural water reuse, which will take force from June 26, 2023. The EU has also set itself the target of reusing 6 times more wastewater by 2025. An ambitious goal, but not unattainable as wastewater can be recovered from various sources (agriculture and irrigation, industrial processes, groundwater utilities, groundwater replenishment and environmental restoration).

Concerns over domestic water use have increased in the last years. Firstly, public awareness is needed to change people’s behaviors, as consumption in developed countries is far from moderated. On average, a Northern American citizen uses 250 liters of water daily, whereas a Sub-Saharan citizen uses less than 10 (according to a study from the french magazine Courrier International special edition, sept-oct 2020). French citizens spend on average 9 minutes in the shower, each minute translating into 15 to 20 liters of freshwater consumed.

To reduce domestic consumption, citizens should: take showers rather than baths, reduce the time spent in the shower, avoid doing dishes under a running tap but use a bowl or sink, collect rainwater for gardening, and buy second-hand products and locally produced DIY goods, as those reduce water usage in factories.Preserving freshwater is also about using biodegradable cleaning agents and avoiding chemical pollution of toilets, showers, washers and drains. 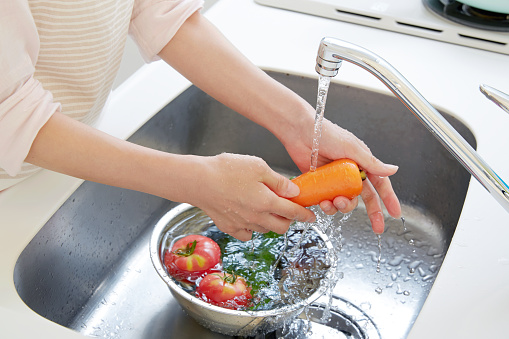 Our agricultural system needs rethinking – crops, inputs and seasonality need to be restructured to create a more sober system. We should cultivate less resource-depleting crops (like rice or corn), avoid monoculture which causes depletion, runoffs, erosion, etc.…, and decrease the consumption of chemical fertilizers. Their use dries out the land, which becomes much more water-intensive to cultivate. More sober and resilient systems exist, such as agroforestry or agro-ecology. Using biological fertilizers, rotating between cultures and choosing plant species adapted to the weather and soil conditions of the region allow for the reduction of water consumption. In fact, with the diversification of cultures, each crop perennially benefits from the services provided by others. Agriculture must also think of using treated wastewater without contaminating the resource or the environment. 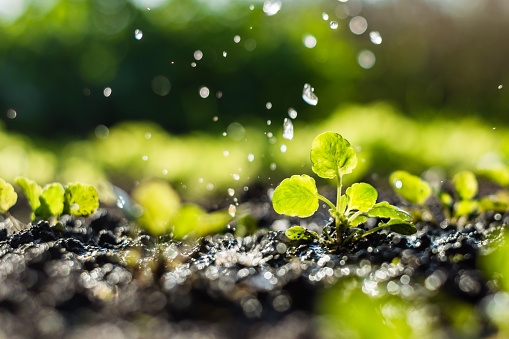 In industry, Circular Economy can be an answer to overconsumption. As water is necessary to extract raw materials and to produce goods, reusing, repairing and remanufacturing would significantly reduce consumption. In Chile, the General Directorate of Water has calculated consumption by type of activity: in 2007, 66% was used for mining, 14.3% for agriculture and 4.4% for drinking. In 2032, the GDW estimates 72% will be used for mining, 8.9% for agriculture and 3.4% for drinking water. Reducing mass consumption of goods would lead to a drop in demand for raw materials, thus enabling Chile to better manage its supply of drinking water. 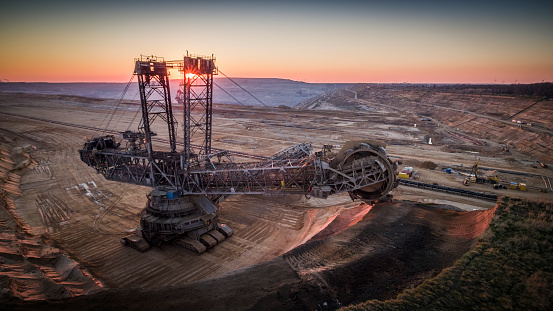 Within industrial processes, freshwater shortages strongly impact the industry, creating great concerns to all parties involved. By increasing the demand and thus reducing the availability of water, industrial actors gave rise to issues of sourcing safety. Some companies, such as Aquassay, have specialized in optimizing water efficiency at the industrial level in order to tackle this issue. Their mission is to optimize industries’ environmental and production performances as well as cities’ water usage and treatment. Water on production sites is part of a complex system, as it is linked to all production and manufacturing processes (heating up, cooling down, diluting, carrying, cooking, as an ingredient, as an input, etc.). To deal with this, Aquassay has developed a SaaS offer that evaluates water efficiency on site, identifies areas of risk and potential improvements, and drafts and implements water efficiency strategies.

Thank you to Joanna Henderson, Founder of Blue Dot and member of the Circulab Community, and Stéphane Gilbert, Aquassay, for all the information they shared with us.